Both The Prince of Wales and The Duchess of Cornwall are committed to supporting the men and women of Her Majesty’s Armed Forces, together with their families and support services. 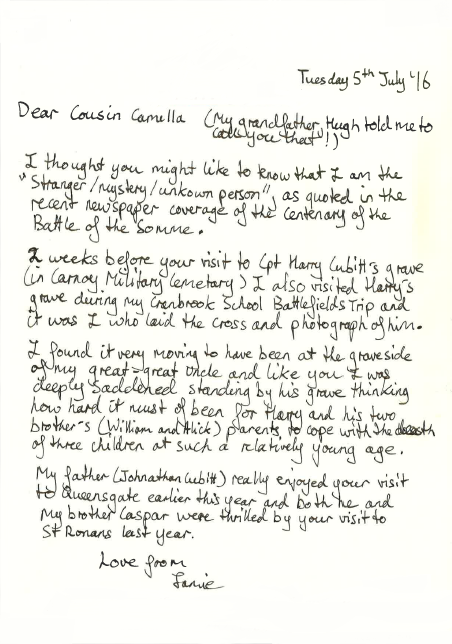 A letter from Jamie Cubitt, a distant
cousin of The Duchess of Cornwall

Later in the day, Their Royal Highnesses attended a ceremony at nearby Ulster Tower to remember those from the province of Ulster who gave their lives during the Battle of the Somme.

The Prince of Wales and The Duchess of Cornwall then took part in a Canadian-led event at Beaumont Hamel, where The Prince laid a wreath and gave a reading in English and French. After the Service, Their Royal Highnesses viewed the preserved trench systems from above.

At the end of the day, Their Royal Highnesses travelled to Carnoy Military Cemetery where The Duchess laid flowers on the grave of her Great-Uncle, Captain Harry Cubitt, who was killed during the second Battle of the Somme, aged 24.

On Tuesday 14th March 2017, at Buckingham Palace, The Prince of Wales with His Royal Highness Prince Henry of Wales presented 154 operational medals to the 2nd Battalion, The Royal Gurkha Rifles, following their return from Operation Toral.  The event also celebrated The Prince of Wales’s 40th anniversary as Colonel-in-Chief of The Royal Gurkha Rifles.

Following the Medals Parade, there was a reception where Prince Harry was reunited with many of those he had served with in Afghanistan in 2007 and met a number of Gurkhas who were wounded during the campaign in Afghanistan. The Prince of Wales met with a selection of Gurkha veterans and their families, including those planning to ascend Everest as part of the Gurkha 200 Everest Expedition, of which His Royal Highness is Patron.

In February, The Duchess attended a Homecoming Parade at New Normandy Barracks in Aldershot, Hampshire, for soldiers of 4th Battalion, The Rifles, who had recently returned from Iraq. The Battalion was the first British Army unit to deploy to Al Asad Air Base in Iraq’s western province of Al Anbar. Her Royal Highness, who is Royal Colonel of the Battalion, took the Salute at the parade and afterwards attended a reception for servicemen and their families. During her speech, The Duchess said: “In the most difficult circumstances you have shown your usual skill and spirit – no matter what the circumstances – and I also know that this will have been enhanced by your irrepressible humour!” Her Royal Highness also visited the families of those deployed to Iraq in November.

On Sunday 13th November, alongside Her Majesty The Queen and other Members of The Royal Family, The Prince of Wales attended the Remembrance Service, laid a wreath at The Cenotaph and stood for 25 minutes in contemplation of the Glorious Dead. Thereafter, The Prince received the Veterans’ Salute on Horse Guards Parade as 8,500 veterans marched from Whitehall, Birdcage Walk and Horse Guards Road. Afterwards, The Prince of Wales attended the Welsh Guards’ Regimental Sunday at Wellington Barracks.