Without The Prince’s Trust’s support, I would have carried on being self-destructive, with no future to look forward to. Instead I’m happy, sociable and I’m actually excited about where my life is going.”

The Prince of Wales is President or Patron of 424 charities

For over 40 years, The Prince of Wales has been a leader in identifying charitable need and setting up and driving forward charities to meet it. From the early days of The Prince’s Trust in the mid-1970s, his charitable interests have grown to the point where his charities represent a broad range of areas, including the Built Environment, the Arts, Responsible Business and Enterprise, Young People, Global Sustainability and Rural Affairs.

Raised by The Prince’s Charities this year.

Young people helped by The Prince’s Trust since 1976.

During the course of the year, a review was undertaken to evaluate the shape and structures of The Prince’s Charities. These reviews take place periodically to ensure that the charities continue to deliver the maximum benefit for the people they were set up to serve. The independently-chaired review was followed by a conference at Dumfries House at which all the Charities were represented.

During the coming year it is expected that some of the charities will form closer alliances or will be merged in order to operate more efficiently, and others will move to become more independent organisations with the status of Royal Founding Patronages. ‘The Prince’s Charities’ as an informal grouping will also be updated during this period.

As well as ensuring the charities are operating as efficiently as possible, these changes will ensure that they build a lasting legacy of His Royal Highness’s philanthropic work for many decades to come, while ensuring that beneficiaries’ needs continue to be met.

The Prince remains passionate about the many causes that he supports and will continue to champion those elements of charitable delivery that are closest to his heart. He believes these changes are vital for the long-term sustainable benefit of all those involved.

It has long been the vision of The Prince that Dumfries House should act as a dynamo for local regeneration, through activity on the Estate and outreach to the local communities. In September, His Royal Highness reopened New Cumnock Town Hall. Originally a focal point for meetings and community groups, the hall had fallen into disrepair and was marked for demolition in 2015. His Royal Highness suggested that Dumfries House take on the renovation and restoration, in line with his vision of heritage-led regeneration and the newly opened building is already proving to be enormously popular with the local community.

The Prince of Wales’s charity In Kind Direct celebrates its 20th anniversary this year. In Kind Direct distributes donated products from manufacturers and retailers to UK charities working at home and abroad. UK charities need all kinds of products to help support their services to people in need, for example, nappies for struggling young families, shampoo and shower gel for isolated older people and warm clothes for the homeless.

To date, In Kind Direct has distributed goods with a value of £170 million, from over 1,000 donor companies, to more than 8,500 charity partners. It has achieved this by developing long-term partnerships with UK and global companies including Amazon, P&G, Colgate-Palmolive, ASDA, Kimberly-Clark, Disney, Johnson & Johnson and many more. In Kind Direct also promotes sustainability – in a world of finite resources its work has a powerful, practical, environmental impact, preventing safe and usable goods from being sent to landfill.

The prospect of becoming self-employed after such a long time on Income Support was quite daunting and overwhelming. Knowing that there was someone there to support and encourage was a ‘life-line’, and also a surprise, that at my age there was an organisation interested in me and my future! I really felt that PRIME Cymru wanted me to succeed – that was unusual.”

Nicola from Maesteg, on PRIME Cymru (The Prince’s Initiative for Mature Enterprise in Wales), a charity set up by The Prince of Wales in 2001 to provide older people with employment support.

Receiving essential products from In Kind Direct has made it possible for us to double the number of programmes we run. This has saved 60 youngsters from being permanently excluded from school. In Kind Direct helps us make a safer Kent.”

The Prince’s Trust Contributes £1.4 billion in the last decade alone as young people continue to feel the pressure

New research from The Prince’s Trust has shown that in an uncertain world, young people are feeling extraordinary pressure. The Trust responded by using its 40th anniversary celebrations to reach more young people than ever before. During 2016/17 the charity supported almost 57,500 young people with three in four achieving a positive outcome in education, employment or training. In total, since 1976, The Trust has helped 870,000 young people to change their lives.

In July, The Prince of Wales met young people at the official launch of The Prince’s Trust Bristol Centre. The young people were engaged in a STEM (science, technology, engineering and maths) session with Ambassador Major Tim Peake CMG. On the same day, The Trust announced that its net contribution to society over the last decade had been calculated at £1.4 billion.

In January, The Prince visited City of Leicester College, where he met young people on the Achieve and Mosaic programmes. This occasion marked the integration of Mosaic into The Prince’s Trust, strengthening and diversifying its range of programmes for young people. In addition, Prince’s Trust International expanded its work and began to make a tangible and sustainable difference in countries as far afield as Barbados and Australia.

The Prince’s Trust is also expanding its reach through digital media. As well as engaging hundreds of thousands of people through its social media channels, it has begun to deliver its Enterprise offering through Prince’s Trust Online, a new digital learning and mentoring channel. This will enable The Trust to reach even more young people who might otherwise miss out on a life changing opportunity. 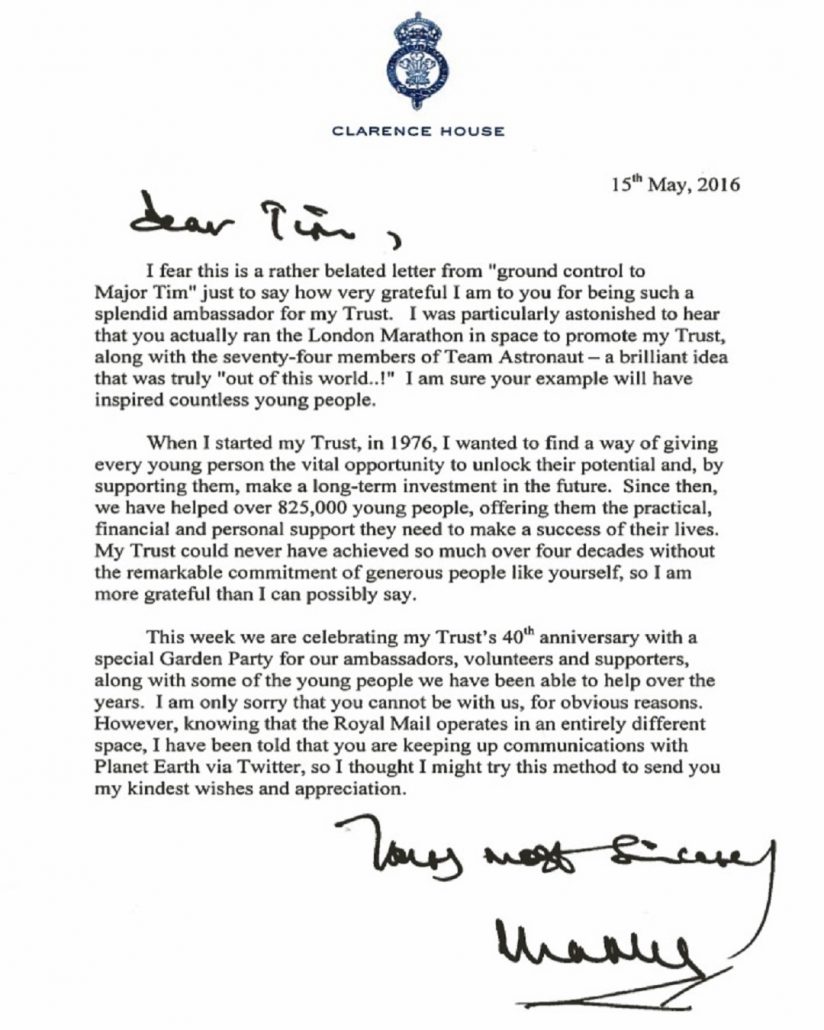 During The Prince of Wales’s visit to a Prince’s Trust centre in Bristol today, HRH talked about why the 40 year work of @princestrust is so rewarding.

The guidance The Prince’s Trust gave me has been invaluable. They’ve given me purpose and have helped me turn my little idea into a life-changing reality.”

Turquoise Mountain was founded in 2006 by His Royal Highness to create jobs in Afghanistan by restoring the historic centre of Kabul, Murad Khane. Its work has since diversified, revitalising other historic locations, communities and traditional crafts, creating jobs and skills, and delivering a renewed sense of pride for those involved. From the early days in Afghanistan, projects have spread to Saudi Arabia and Burma.

This year, Turquoise Mountain expanded its work in Afghanistan, with the launch of a £2.5 million cultural protection initiative.

In Burma, the charity completed a restoration project in Yangon’s Historic Downtown and commenced the regeneration of the iconic Tourist Burma building.

Working with Aung San Suu Kyi’s Foundation, the project has trained craftspeople and protected Burma’s cultural heritage. In Saudi Arabia, the charity has worked with over 500, mostly female, artisans to help revive Saudi handicrafts. Their work has already attracted interest across the region, benefiting craftspeople and the survival of their skills directly.

This year also saw the opening of the exhibition Turquoise Mountain: Artists Transforming Afghanistan, at the Smithsonian, which has already seen over a quarter of a million visitors.

We are delighted to receive such significant support from The Prince’s Countryside Fund. With this grant, we have been able to continue to establish our shop as a platform for serving and involving the local community for the next 20 years.”

His Royal Highness established The Prince’s Countryside Fund in 2010 in response to the growing challenges facing rural communities as the small family farming sector continues to face economic pressure.

With farming very often being the lifeblood of many rural communities, the Fund aims to deliver significant change for the British Countryside at grass-roots level. By the beginning of this year, the Fund had supported over 200 individual projects helping the prospects of farm business, driving the economic vibrancy of rural communities and delivering aid at times of crisis.

In July 2016, The Prince of Wales launched the new Prince’s Farm Resilience Programme, which is being implemented across fifteen locations in the United Kingdom. It is the largest programme that the Fund has ever undertaken and is driven by extreme need – showing that while small farms can be as successful as large ones, they need the right kind of help to get there. The programme is aimed at “hard to reach” smaller farm businesses, and follows the successful model of The Prince’s Dairy Initiative, and recommendations from new research by the University of Exeter.